Re-reading The Book of the New Sun

This time I am following the method Wolfe himself used when reading The Lord of the Rings, only allowing myself one chapter per day. He describes this in my favorite essay on Tolkien’s classic, The Best Introduction to the Mountains.

I don’t recall exactly how I came across The Shadow of the Torturer (TSotT), the first in the series. Probably at the used paperback store in my small college town. This particular store no longer exists, but you might still have such a place near your home, with a lady reading at a desk who may greet you when you walk in, if she is not too engrossed in her book. “Romance” novels fill half the shelves. Pass the paint-by-numbers trash and head for the shelves marked “Science Fiction & Fantasy” on a hand-stenciled sign, and I hope you have a mystical encounter like mine.

The Don Maitz cover would have hooked me. I recall reading an anecdote from a writer, maybe Glen Cook, or Wolfe himself, that a book distributor said he’d buy 20,000 copies of whatever book had that cover (pointing at a painting in the publisher’s office), without any idea of what the book was. We are not told not to judge books by their cover, but it is like the interview process–before you open your mouth, your appearance and how you present yourself have told your interviewers much. As with books, the external and internal may have no relation, but our minds are wired for making snap decisions and are biased in favor of caution.

The Maitz cover depicted a caped, masked man with a sword. It had skulls. These were all fantasy cues, but the masked man stood on a thin metal platform that hinted at science fiction. Maybe the “World Fantasy Award Winner” over the title also helped me buy. My initial impression of the cover art would have been almost instantaneous and I have studied it more in writing this blog post than I did before the purchase or during my reading. 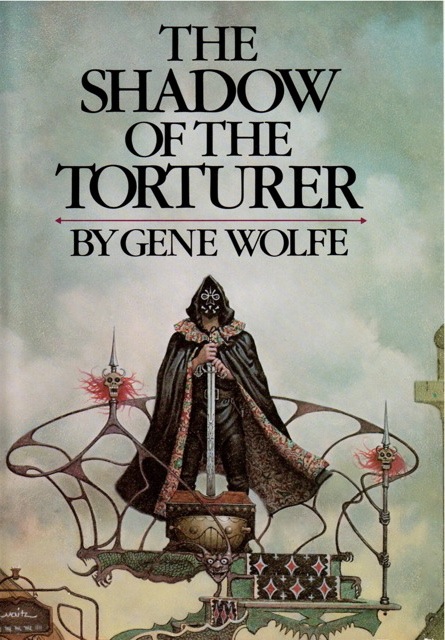 At the time, I had not yet developed the habit of consulting Amazon reviews on my phone before purchasing a book. In fact, I didn’t have a smartphone, a flip phone, or even a laptop. Today my phone breaks the spell cast on me when I encounter a new book. I might make a note to read it later or come back another time, or get lost browsing the reviews on Amazon or Goodreads and forget about the book altogether. When we buy a book we are imagining that we are also buying the time to read it (I have seen this quote in a museum basement bookstore in San Mateo County.) I now must admit to myself that I do not have time to read all the books I would like. In case the mirror isn’t enough reminder, I keep a Halloween skull on my bookshelf as a memento mori.

This new habit of checking my initial buy impulse saves me money and space on my shelves, but precludes that serendipitous meeting of reader and book that I have always believed in–that certain books come into our hands at times when we need them or are ready to read them. This can only happen in an analog world and cannot be replaced by algorithmic suggestions that market to us based on the hive mind. The digital simulacrum that will soon arrive may be good enough to fool most of us, and its nature is to shut us off from higher options.

In Chapter VI of TSotT, Severian hears about The Book of Gold from Ultan the librarian. A child, upon finding this book, leaves children’s books behind and is ever after in the library, no matter where he is. I was one of those children who had been lost in the library years before encountering Wolfe. How many children today are lost to a device that borrows its design from slot machines instead?

Returning to my first encounter with TSotT, the blurbs on the first page and back, from Harlan Ellison, Gardner Dozois, and Ursula K. LeGuin are marketing, yes, but these blurbs seem quaint today, and what they wrote was true. These were almost like recommendations from friends, because my world was smaller then and I only knew a handful of people personally who had similar tastes in reading.

Before Chapter I: Resurrection and Death there is a verse of poetry:

A thousand ages in thy sight
Are like an evening gone;
Short as the watch that ends the night
Before the rising sun.

At the time neither the 89th (90th) Psalm nor the Isaac Watts hymn O God Our Help in Ages Past were familiar to me from my Southern Baptist youth, although it can be found in one of the hymnals I used in the chapel of my childhood. However, I have sung it many times since this initial encounter and have only come to this realization now as I write this essay.

The first line of TSotT reads, “It is possible I already had some presentiment of my future.”

By now I had reached the decision point and paid the lady at the desk a buck seventy-five (half the cover price.) I’m sure I became lost in the book as soon as I began reading it in the comfort of my dormitory (this place is another that has been torn down, but unlike the bookstore, deservedly so.)

The beginning of this book is so wonderful, I tried to imitate Wolfe and wrote something in his style in my notebook. What I specifically wrote is not memorable to me but only the impulse to produce something as beautiful and poetic. In Wolfe’s BITTM (which you should have read by now) he remarks that he wished there were more imitators of Tolkien, even if they are inferior to the original.

I love the way Wolfe takes the familiar conventions of science fiction and fantasy, many of the tropes and stereotypical characters, and, from that surface similarity, takes us deeper into them, and higher. In TSotT Ch. XXXIII “Five Legs”, Severian writes a short essay on the similarity between an executioner’s art and a writer’s, concluding that to feel himself an artist, he must add something of his own beyond satisfying the spectators/readers, the authority/publisher, and tradition. This is the kind of digression in the series that I enjoy more and more with each reading. Even in the first reading, when what I mostly cared about was what was going to happen next, they did not dissuade me from continuing.

Many things confused me in my first reading, but I ploughed ahead and at least was able to follow the story most of the time. I was not a Catholic Christian at the time I first read TBotNS so the different orders, saint names and feast days (like for Saint Catherine), the Conciliator and the relic known as The Claw of the Conciliator, these were over my head. As I learned more about Tolkien and Wolfe I was impressed that such highly intelligent men could be faithful Catholics. I had gotten this impression of Catholics as simple people who follow the teachings of a man in Rome the same way some Protestants blindly follow their own charismatic pastor or televangelist. Encountering such intellects in the Church shattered that misconception, removing one of the the obstacles in my own spiritual journey to Rome.

I think, especially when we are young and more capable of this, that certain books are able to expand our minds exponentially in the reading. I would not have thought myself young at the time, but looking back today, the boy who bought that book was indeed still a boy, who, in wrestling with ideas and concepts introduced in this series, grew and changed immensely.

I do not know what became of my original copy. I have moved 4 times since that day, so it is possible I lost it in a move. Every time we cut ties to a place we lose an unseen part of ourselves; it seems only fitting that this be represented by visible loss as well. It was a paperback printed almost 40 years ago, and these generally do not hold up well. I replaced it with Shadow & Claw which contains the first two books of the series. I annotated it and lent it out, never to be returned. Then I bought another Shadow & Claw (the one I am reading and annotating now) and a Timescape/Pocket Books edition of The Shadow of the Torturer to replace my original. It rests in front of my keyboard as I write these words, and I will return it to my glass-fronted bookcase where I keep my most treasured books when I post this entry. 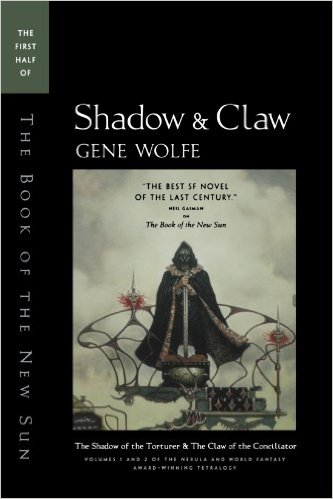 Unlike Severian, I do not claim to have perfect recall. It is possible that I didn’t encounter TSotT this way, but that a friend loaned me a copy or that i came across it in the college library. The latter is the least likely possibility. I distinctly recall my purchase of Sword of the Lictor at this used bookstore, so to me, it seems most likely that I found TSotT there.

As I continue the re-reading of the series in preparation for reading The Book of the Long Sun, I may post more thoughts and memories here, but I make no promises. I must admit that this simple post has taken me over a month to write, and several drafts. I only now feel I am able to turn it out of the nest and let it fall or fly on its own.

This website is for my own pleasure and I write here mainly to avoid the more serious writing projects that I should be pursuing (One concerned Saint Teresa of Avila, whose feast is today), or as a break from them. In the meantime, I recommend you read a good book!